We nipped down to check out the daytime shenanigans in honour of the late, great Freddie Mercury’s birthday down at legendary Ibiza hotel, Pikes.

Ever more impressive hotel parties seem to be springing up everywhere in Ibiza recently. But the original, iconic island party hotel has to be Pikes. These days home to Ibiza Rocks House, but with an illustrious history of outrageous rock-star parties too numerous to mention.

I first heard of Pikes Hotel back in the early eighties, whilst still a wide-eyed teenager. I remember seeing the video for Wham’s Club Tropicana, filmed at Pikes, with my mouth open in awe. The beautiful people, the pool, the glamour!

So it was an absolute delight to finally rock up to Ibiza Rocks House at Pikes yesterday to celebrate the birthday of another of this Ibiza hotel’s legendary clients, the late, great, truly inimitable (despite everyone’s best attempts) Freddie Mercury.

Nestled beautifully into the mountains around San Antonio, Freddie loved Pikes Hotel. He held some pretty unforgettable (according to the lucky ones who attended) parties at Pikes. He had his favourite suite which now bears his name and Tony Pike, the hotel’s famous proprietor, sure knew how to throw a party. He’s not lost his touch, ladies and gents.

The party started at 1pm, and by the time we arrived around 3pm, the pool was buzzing with mustachioed ladies, mustachioed men and hell, I even saw a dog with a moustache (it was made of stone, but still…). “No moustache, no entry,” insisted the receptionist firmly, armed with a big black body-paint crayon and a mischievous glint in her eye.

Bravofox (aka Jamie Porteous) was blasting out super-smiley electro-pop with a tasty Balearic twist and some nifty live vocals floating in and out, providing the ideal backdrop to the daytime Freddie frolicks. Cocktails abounded and the vibe was funky and friendly.

Characteristically starving when we arrived, we ordered some tapas by the pool. Mmm! Patatas Bravas (but made with sweet potato and with sweet chilli sauce and ‘salsa brava’), Tortilla (Spanish omelette) with spinach and honey plus nachos with melted cheese served with guacamole, yogurt dip and a tomato and chilli sauce.

Lunching by the pool

The nachos came in a very generous portion, the tortilla was served with soft, fresh, warm bread and the sweet potato chips were divine. And what’s more my bill, including a glass of white wine and a beer came to just €30.50. When you consider that some other Ibiza party hotels present you with a bill like this just for the drinks, we were very pleasantly surprised.

Kids ran around happily (and noisily) splashing around their own private pool and bouncing around gleefully on some impressive looking bouncy castles. And yes, even the kids were proudly sporting Freddie ‘tashes.

Before we knew it, 4 hours had flashed by and my moustache had begun to melt into a shapeless streaky black blob as we entered lustily into the spirit of the party.  We joined the crowd in enthusiastically belting out raucous renditions of pop classics such as Madonna’s Vogue, Tears for Fears’ 1980’s monster hit Shout and all the while observing the queue at the door growing longer by the minute.

We literally dragged ourselves away around 7.30pm, by which time, it has to be said, the party was just getting going with the full evening’s line-up yet to come (sob!). And we left only because we had our very own Spotlight closing soireé at We Love… to excitedly head off to – more about that from our clubbing team soon!

It seems that daytime parties are back, ladies and gents. Perhaps not in the clubs as before, but increasingly at gorgeous hotels such as Pikes, Ushuaïa, Hard Rock Hotel,Aguas de Ibiza, Destino Pacha and others. Not to mention the expansion of the island’s rocking, ever-more-popular boat parties.  Anyone who came to Ibiza years ago, when daytime partying was one of the defining characteristics of the island’s music scene, will no doubt be delighted to see the reemergence of that most iconic of Ibiza pastimes: dancing to fantastic music, surrounded by incredible beauty, in the gorgeous Balearic sunshine.

Many say that’s one of the (many) things that made them fall in love with Ibiza. Carefree days of dancing in the sunshine with smiling people from all over the world. Freddie Rocks Ibiza delivered exactly that, and it was very nice to see parties such as this one that cater really well for the kiddies too. Nice.

It was good to be there in the beautiful Ibiza countryside, dear reader, and feel those sunshine party vibes. A fab, family day out with just a touch of glamour, we say happy birthday Freddie and high five Pikes! 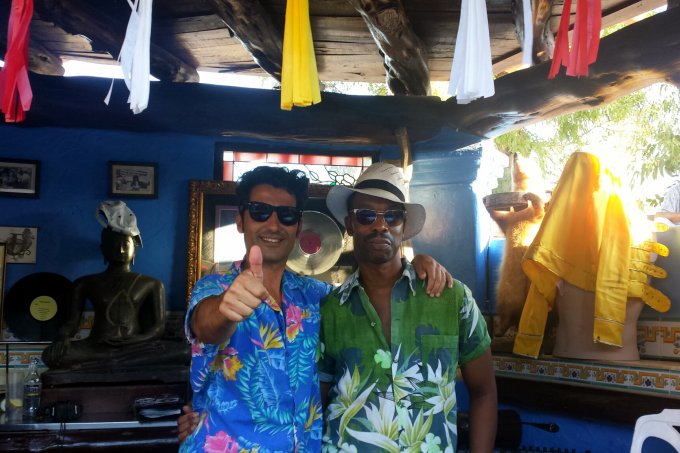